In Cabo Delgado, Mozambique, agri-businesses like AviMagas are thriving and expanding their operations to have an impact on their surrounding communities, better their families’ lives, and provide opportunities for the local workforce. TechnoServe’s Catalisa program teaches commercial poultry producers how to optimize their market strategies, remain operationally e­cient, and increase their pro‑ts through production at scale via one-on-one coaching.
Young Farmer 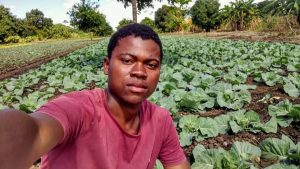 … I will not stop working, I will continue, utilizing all of the lessons I learned from Catalisa.

Same Pereira is a young man of 23 years of age, born in Namicopo, Nampula province, where he spent part of his childhood with his parents and siblings, until he was ­ve years old. The separation of his parents forced Same to move to Malema-Sede with his mother, where he continued his primary education. However, due to his mother’s ­nancial limitations, Same felt obliged to move to Mieze, where his father lives, in order to continue his studies, which he continued up to middle school. In 2014 he moved to the city of Pemba, where, together with his aunt, he completed high school at the Pemba Secondary School in 2017. Like many youth who graduate from high school in Mozambique, particularly in Cabo-Delgado, Same Pereira faced the di‑culties of entering higher education or vocational technical education as an alternative. With no education and no job, Same returned to Mieze, and perceived agriculture as the only alternative to face the challenges of unemployment. He began to help his father with his farming activities, where he learned production techniques that he later applied on a small plot granted by his father, producing lettuce, the sale of which earned him only 20,000 meticals each season. But as Same had other responsibilities with his family, including taking care of his daughter and wife, he had to create other alternative means of living – trading dierent products in the city of Pemba, including products from his farm in Mieze.

In 2019, after the launch of the Catalisa Project in the administrative post of Mieze, community members with eligible pro¬les and entrepreneurial ventures were identi¬ed to be project partners, most notably Mr. Pereira Tambu, father of Same Pereira Tambu . He was a part of the ¬rst group of farmers to receive technical assistance, irrigation equipment, a drip irrigation system and motor pump. The results achieved in Mr. Pereira Tambu’s production ­eld aroused the interest of Same to be a part of the project as a young farmer. After submitting his application, he was trained by the Catalisa team in best agricultural practices, and, due to his dedication and spirit of entrepreneurship shown during the training, was approved and started activities with the project. At this point, Same started to dedicate himself entirely to farming as a business in Mieze.

…Working with Catalisa is awesome, and the results speak for themselves, I have increased my production area, and because I need to devote more time to my farm, I left my brother in town, he is doing the business, I help him manage the distance. 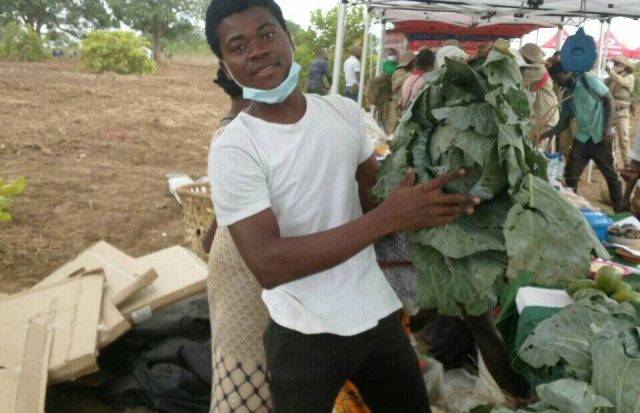 The small plot granted by his father became insufficient to meet the demand for his products locally, which forced Same to acquire by lease a new area with dimensions of 50m2 where, with the assistance of the project, he produces di erent crops, namely lettuce, cabbage and tomatoes. This acquisition has signi¬cantly improved his production and income. Currently, Same earns an average of 162.000 meticais per season and he invests more of his time in the business, resorts to the help of some friends, and pays them at the end of each harvest. The profits from his business have improved his life and that of his family. Same was able to buy a motorcycle and helped his wife start a business selling snacks, as well as helping with some of his wife’s school expenses.

For Same Pereira, the Catalisa Project has shown that it is possible to make dreams come true. It is because of this that in the future, Same plans to expand his production areas to other locations outside the village of Mieze and acquire a truck that will facilitate the ow of production to di erent markets in the province of Cabo Delgado. He also projects to diversify his activities by investing in other areas such as poultry farming and cattle breeding in Mieze, realizing now that agriculture is an area that has a lot of potential for pro¬table investments.

The only difficulty I have so far is the market. Our market here in Mieze is not very strong, we can produce large quantities and have nowhere to sell, and there are also products that we don’t produce because of our market. For example beets, we can’t produce in large quantities, as here we don’t consume much, we don’t have a market for it.

Same is a creative young businessman, and uses his innovative skills to respond to day-to-day challenges in the area of agriculture. One of the ways he has marketed his products if through his Facebook page, called “Pequeno Agricultor” where he promotes his products, and interacts with other growers and vegetable buyers. [https://web.facebook.com/samepereira.tambu In conversation with Same, you can see that his goals to continue his studies are still clear, but this time, more clear in relation to the area in which he wants to specialize, agronomy. Same wants to be a professional agronomist, since he believes that agriculture will bring him many opportunities to grow as an entrepreneur and continue to improve his life.

I have so much to thank the Catalisa project for everything it has done for me, although I am sad that the project is ending this year. However, I will not stop working and will continue utilizing all of the lessons I received from Catalisa.